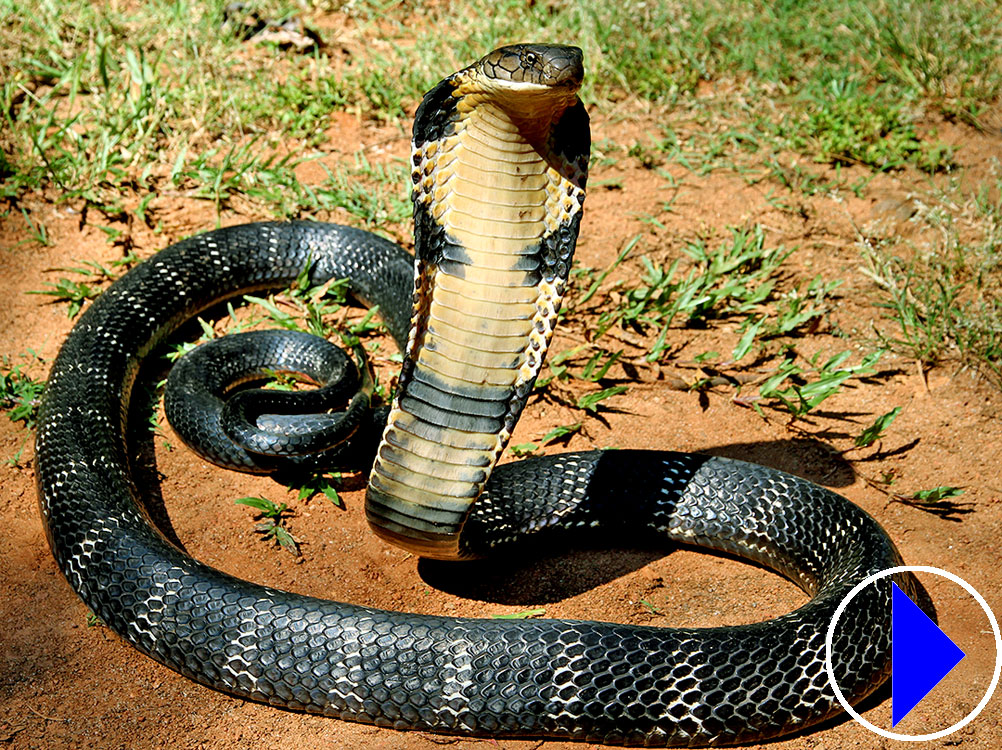 More info: The king cobra is native to south and southeast Asia where it inhabits forests and swamps. It may grow up to 18 feet long and is one of the most venomous snakes on the planet.

When confronted, the king cobra is able to lift up to a third of its body off the ground and still move forward to attack. When the king cobra is on the defence, it produces a distinctive hood which flares around the head and makes the snake look larger and more dangerous. The hood is not skin but a system of rib bones and muscles which are able to flex. Fortunately, king cobras are shy and will avoid humans whenever possible.

The king cobra produces a venom which is neurotoxic which directly affects the nervous system. Even just a very small amount can send its prey into paralysis and a human can die within minutes of being bitten.

The diet of the king cobra consists mainly of other snakes so they are generally considered cannibalistic. King cobras do not have teeth and so swallow their prey whole. Special digestive juices break down poison if they eat other venomous snakes. Snakes do not need to drink water to survive, but they will absorb it through their bellies as they pass through naturally wet areas such as streams, marshes, and creek beds.

The king cobra is the only snake which builds a nest. When a female king cobra prepares to lay eggs, usually in the spring, she will create a nest of leaves and twigs. She builds up walls, as well as a cover, to insulate and protect the eggs she will be laying. A clutch, or group of eggs, can be as many as 50 eggs. The female king cobra remains in the nest, on guard, for several months until the snakes are hatched.