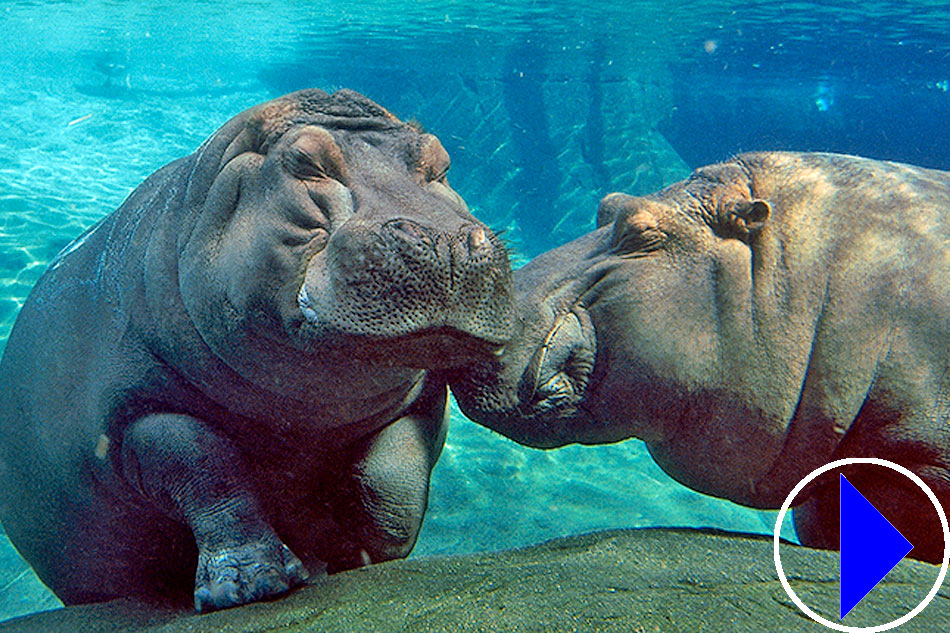 
More info: Hippos do not swim or float but walk or stand on surfaces below the water such as sandbanks. In the wild they spend most of the day in water to protect their sensitive skin from the sun. Hippos secrete an oily red substance that acts as a moisturiser and sunblock. Although hippos can hold their breath for approximately seven minutes, most adult hippos resurface every three to five minutes to breathe.

Hippos feet have four-webbed toes that splay out to distribute weight evenly and therefore adequately support them on land. Though they are bulky animals, hippos are able to run up to 30 km/h over short distances and are able to climb fairly steep banks. They leave the water pool at night to graze for four to five hours, covering up to eight kilometers (five miles) of territory. They will eat about 40 kilograms (88 pounds) of food during this time. When returning from grazing before dawn, they will generally enter the water pool at the same spot they exited.

Hippos are social beasts, hanging out in groups called schools, bloats, pods or sieges. Schools of hippos usually consist of 10 to 30 members, including both females and males, although some groups may have as many as 200 individuals. No matter the size, the school is usually led by a dominant male hippopotamus.
In Africa, the hippopotamus is considered one of the most dangerous animals and is highly aggressive, particularly if you get between it and the water.