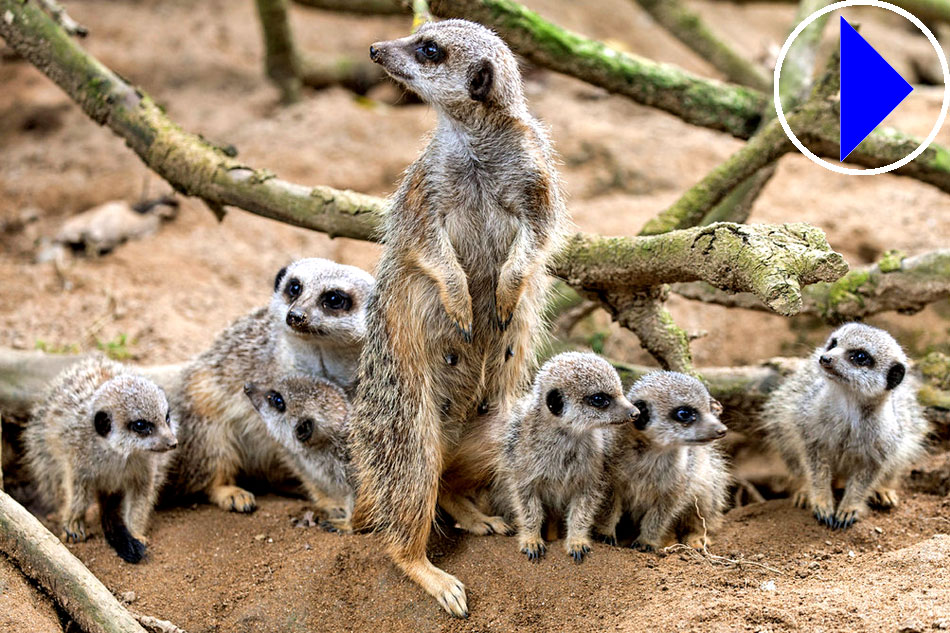 More info: Meerkats are burrowing members of the mongoose family found in southern Africa, from the extreme southwest of Angola, through Namibia and Botswana, and into west and north South Africa. They have tan and grey coats with dark brown patches around their eyes and at the tip of their tails.

Standing at only 30 cm (12 in.) tall, meerkats, also known as suricats, live in groups of 20-50 extended family members and they depend upon group co-operation for their survival. These family groups are called mobs or gangs and are led by an alpha pair of meerkats with the female being the most dominant. All the group members participate in gathering food, keeping a watch for predators and taking care of the young.

In the wild the meerkats on lookout or sentry duty will find a high point such as a termite mound and perch on their back legs in their well known characteristic stance. The sentinels scan the sky and surrounding desert for predators and when dangers is sensed a distinctive bark is sounded which sends the mob scrambling for cover. Predators of meerkats include snakes, jackals and birds of prey.

Meerkats spend nearly five to eight hours foraging for food everyday. Meerkats are mainly insectivorous, eating insects such as scorpions, beetles, spiders, crickets, centipedes, millipedes and worms. They also eat eggs, roots, tubers, small reptiles and small mammals.They hunt by scent, and often dig out soil or turn over stones to uncover hidden prey. Meerkats return to an area to feed only after a week of the last visit so that the food supply is given time to replenish.