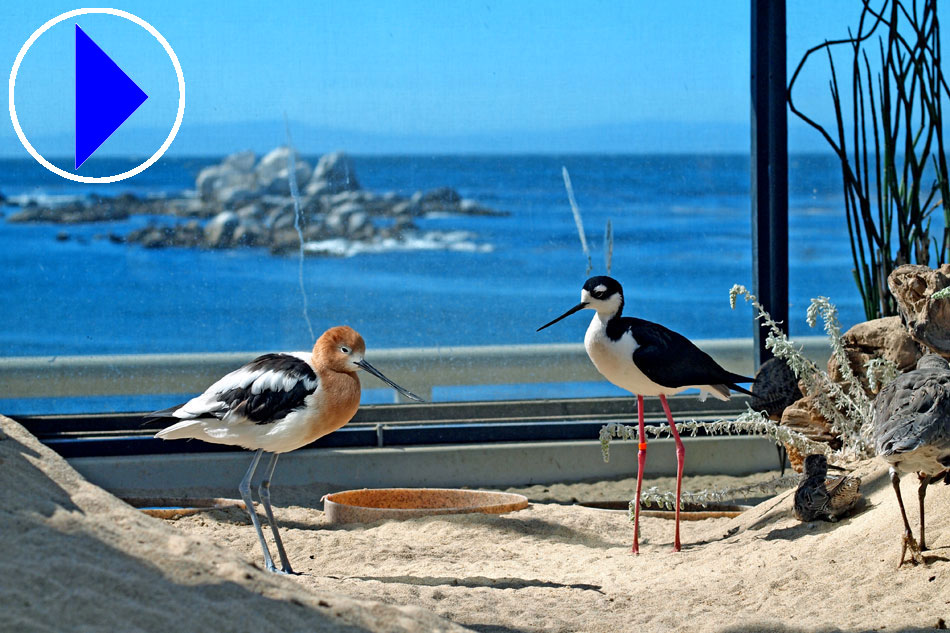 
More info: The webcam features black-necked stilts and black oystercatchers. Most of the birds in the aviary, were rescued or injured and would not be able to survive in the wild. As well as bird watching watch out for crabs and shrimp.

Black-necked stilts are found throughout the southern and western United States, Central America, and south to Peru. The black-necked stilt is a black and white shorebird with darker coloured dorsal feathers, a long neck and a thin, straight, black bill. The legs are long and red or pink. The male has glossy black feathers and a white spot above each eye. The female has dark, brown dorsal feathers.

Black-necked Stilts are almost always seen near shallow water, including both salt and fresh water, especially mudflats, salt pans and saltmarshes. They also inhabit man made areas such as sewage ponds and evaporation pools as well as flooded fields. The black-necked btilt uses its long legs for wading as it feeds on tiny insects and crustaceans on the surface of the water.

The black oystercatcher is found on the shoreline of western North America, ranging from the Aleutian Islands of Alaska to the coast of the Baja California peninsula. They are found along rocky shorelines in all seasons. The black oystercatcher is recognisable by its orange-red bill and yellow eye ringed with red. They are usually seen in pairs or in small to medium-sized flocks, but may aggregate into larger flocks in sheltered areas. They forage mostly during low tide, moving slowly and deliberately through the rocks in search of food. When alarmed, they take flight with a loud, piercing whistling.