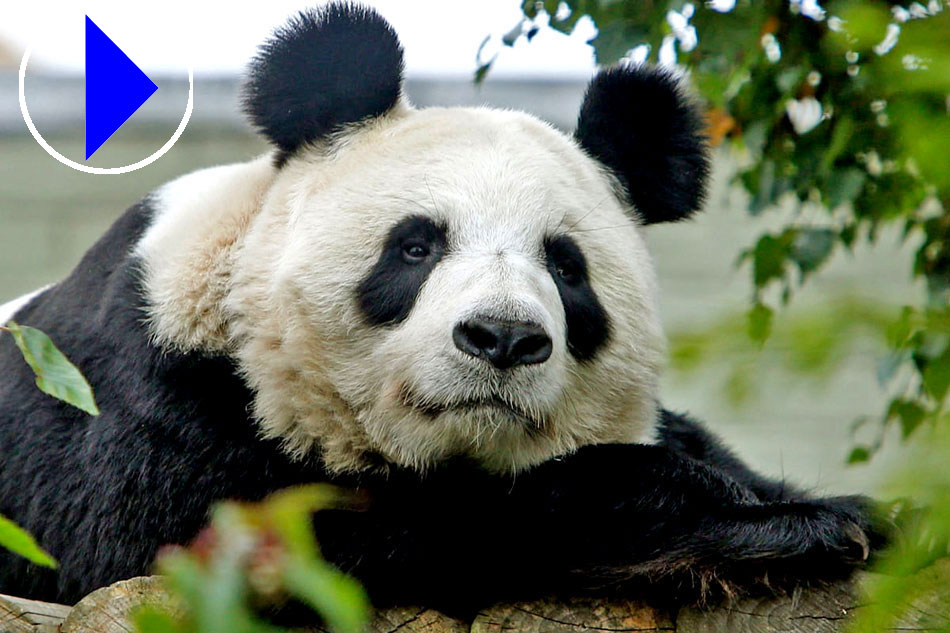 
More info: Edinburgh Zoo is home to the only giant pandas in the UK. The female giant panda is called Tian Tian (Sweetie) and the male is Yang Guang (Sunshine). Both pandas have similar enclosures but they are separate as giant pandas are solitary animals outside of the breeding season. The outdoor enclosures feature tree trunks for the pandas to scratch against and climb; large wooden climbing frames and tree houses; caves and ponds. Each panda also has an off show area where keepers weigh the pandas each morning, carrying out important daily training. The pandas are active both day and night but their activity patterns can vary each day and with the changing seasons.

The Giant panda, (Ailuropoda melanoleuca), also called a panda bear, inhabits the cool, wet bamboo forests in the mountains of central China. Giant pandas stand around 750 cms high and weigh up to 150kgs. Life span is about 15 to 20 years in the wild and 30 years in captivity.

Giant pandas are solitary creatures and the only time they seek each other out is during their spring mating season. Males will use their sensitive smelling ability to sniff out a female when ready to mate. Female pandas give birth to one or two cubs every two years and the average gestation time is 135 days . Baby pandas are born pink and only measure about 15cms. They are born blind and only open their eyes six to eight weeks after birth and begin crawling at about 10 weeks of age. Panda cubs start eating bamboo between 7 and 9 months of age and continue nursing until they are 18 months, when the cub is weaned and sent to live on its own. Female giant pandas reach maturity at 4 to 5 years old and the males at 6 to 7 years old.