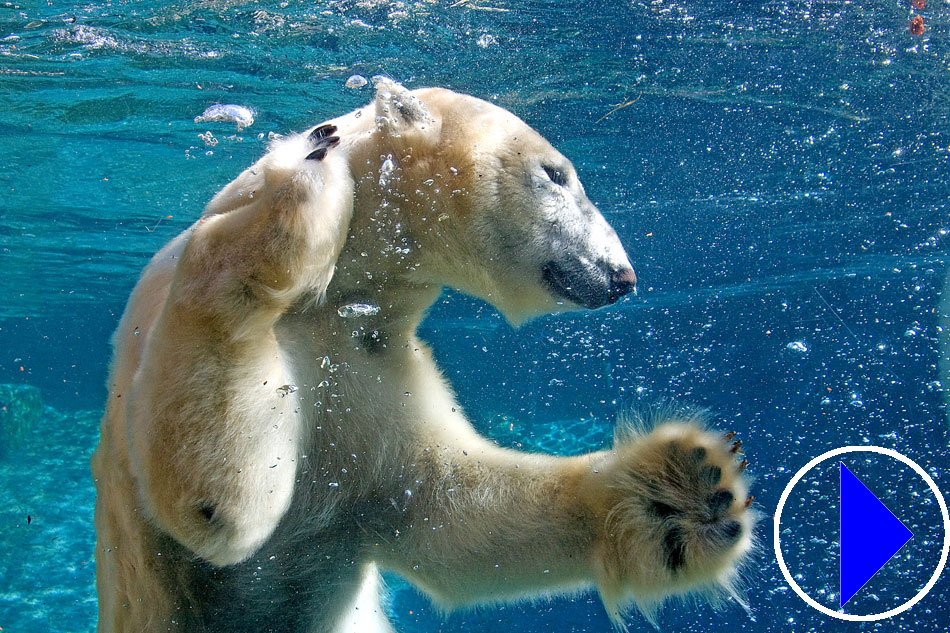 More info: San Diego Zoo received its first polar bear in the summer of 1917 and typical of all zoos of that time, the bear was displayed in a cage. Following a gift from Ellen Browning Scripps, construction commenced of some of the world’s first zoo habitats without bars. By 1926, a new polar bear grotto was complete and the revolutionary design offered amazed visitors close and unobstructed views of three polar bears.

Today, the polar bears at San Diego Zoo live in a wonderful tundra habitat complex: the Conrad Prebys Polar Bear Plunge. The focal point of which is a large pool. From the underwater viewing room, visitors can see how agile and playful the polar bears are. They often swim right up to the glass to check out all the humans on display !

In the wild, polar bears live in the Northern Hemisphere and are found in Alaska, Canada, Greenland, Norway and Russia.

Male polar bears may weigh up to 1,500 pounds and the females are smaller at around 600 pounds. Polar bears are thought to have evolved from brown bears close to 110,000 years ago. They have special adaptations for living in an icy environment, including, a dense fur coat and up to 6 inches of insulating fat covering their body and rough papillae on their foot pads for extra traction on snow and ice. Polar bears are excellent swimmers; their scientific name, Ursus maritimus, means "sea bear," They use their large front feet to paddle and their back legs as rudders. Polar bears have been known to swim more than 60 miles (100 km) without rest.

Unlike other bears, polar bears do not hibernate in the winter. They continue to hunt, unless the weather is extremely cold. Then they may seek shelter in a snow den.