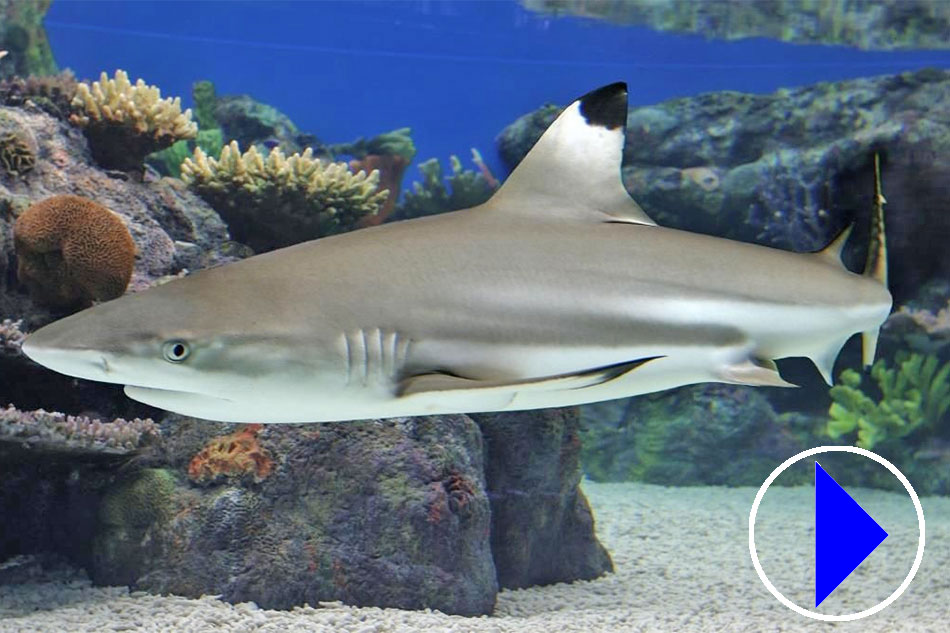 More Info: Blacktip reef sharks are found in warm coastal waters throughout the world and are among the most abundant of sharks. They inhabit bays, estuaries, coral reefs, and the shallow waters off beaches as well as river mouths. This powerful swimmer is well known for its tendency to enter incredibly shallow water, and is often found in water only 30 centimeters deep or less, with its distinctive dorsal fin protruding from the surface.
The blacktip reef shark is a moderately-sized, brownish shark with a blunt snout, horizontally oval eyes, and black tips on all the fins except for the anal fin, which is white. The Blacktip Reef shark is one of only a few sharks that can jump fully out of the water, a behaviour called ‘breaching’. They have also been observed surfacing to look around - an action called ‘spy-hopping’.
Blacktip reef sharks are timid and skittish and though they have occasionally been known to bite people that are swimming or wading, they do not pose a serious threat to humans. The International Shark Attack File (ISAF) has recorded just 11 unprovoked blacktip reef shark bites on humans since 1959.
The Blacktip Reef shark status, is ‘Near Threatened’. They are often the by catch from other fisheries and are frequently wasted. Their populations are declining and so are the population of many other shark species. Blacktip reef shark fins are used for shark fin soup which is a major factor in the population decline.