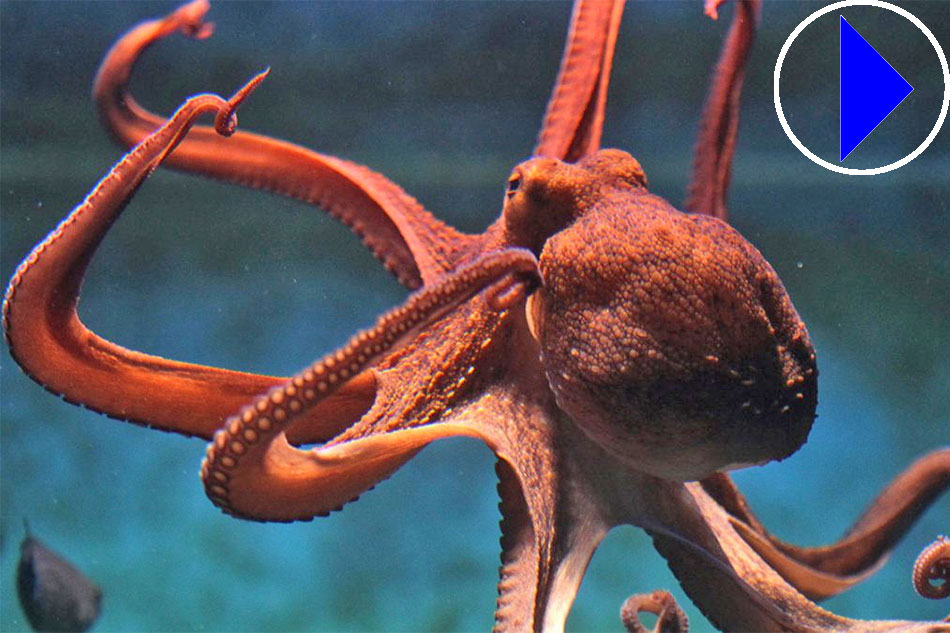 More info: The giant Pacific octopus is a large marine cephalopod of which there are hundreds of species and includes the nautilus, squid, argonauts and cuttlefish. It is native to the northern Pacific Ocean off the United States up to Alaska and around Japan. The giant Pacific octopus grows bigger and lives longer than any other octopus. It has a complex nervous system and lays eggs not larvae.
All species of octopus have eight arms with 2 rows of suckers, its bag shaped body, called a mantle, has two eyes on top which have a similar structure to human eyes. It has three hearts – one to pump and circulate blood around the body and two to oxygenate blood by passing it around the gills. The mouth or beak is on the underside.
Giant Pacific octopuses live in crevices and small caves, out of sight of predators. Their diet consists of fish, crabs, clams, shrimp and abalone. When they catch their prey they first bite with the beak and then inject a paralising venom and an enzyme that breaks down the animal’s protein, softening its muscles and internal organs. The octopus then feeds on this near liquid soup and discards the remains outside its home creating an “octopus garden” of empty shells.
The female octopus produces tens of thousands of eggs which she guards, without taking food for herself, for 5 to 6 months, until they hatch. After they hatch the female octopus dies and after mating the male also dies. Most of the young will be eaten by fish and other marine life but a few will survive to carry on the life cycle.