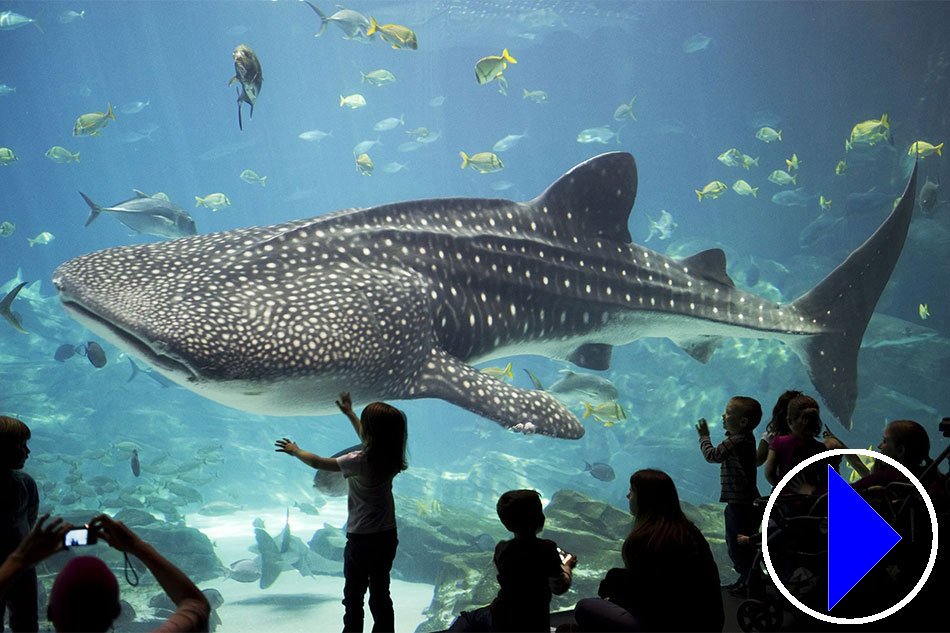 More info: The incredible Ocean Voyager Aquarium is home to four whale sharks, four manta rays and thousands of other fascinating fish. As one of the largest single aquatic exhibits in the world, Ocean Voyager features an acrylic tunnel for guests to view thousands of marine creatures on all sides, as well as a giant acrylic viewing window to explore the oceans like never before.

Whales sharks are not whales; they are sharks, though they do have things in common with whales, such as their method of filter feeding and having a skeleton made of cartilage not bone.

Whale sharks are fish, rather than mammals like whales. They are the largest fish in the world and may grow up to 12 meters long, but on average they grow 5.5 to 10 meters and weigh 18.7 metric tonnes – about the size of a school bus ! Whale sharks have a flattened head and a blunt snout and short barbels – whisker-like sensory organs protruding from their nostrils. Their backs and sides are gray to brown with white spots and pale stripes. Their bellies are white. Each whale shark has its own unique pattern of spots, much like human fingerprints.

Whale sharks are filter feeders - they open their mouths, let in a large volume of water, filter out the food and then release the water and any debris back into the ocean. They do not attack and tear apart their prey like most other sharks. Plankton are their main food source, but they also eat shrimp, algae and other marine plant material, sardines, anchovies, mackerels, squid, tuna and albacore.

Despite their huge size, whale sharks are not dangerous but are gentle creatures that mostly ignore humans.

Whale sharks have a lifespan that is estimated to be 70 to 100 years.