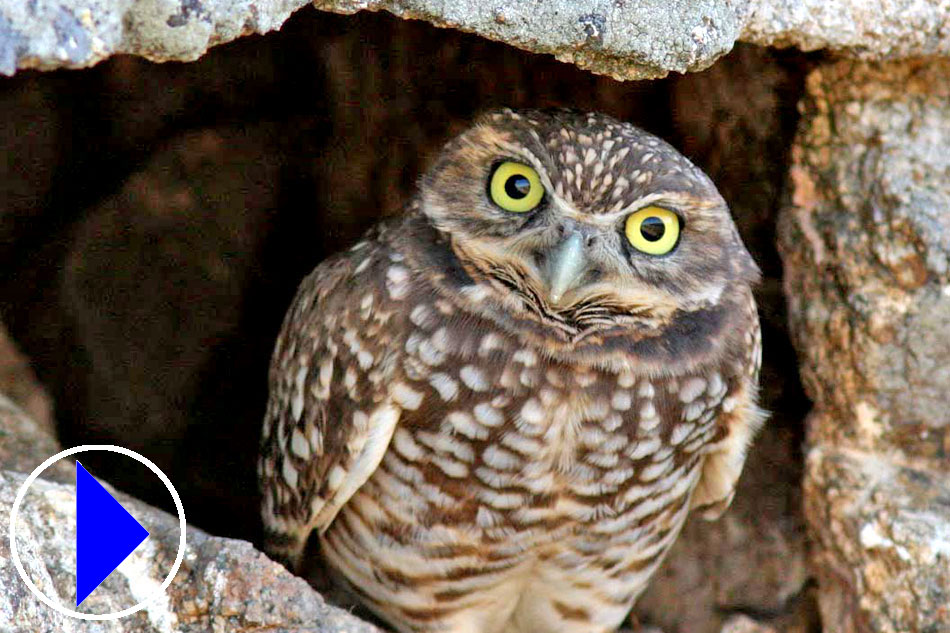 
More info: The burrowing owl (Athene cunicularia) is a small species, weighing only 150g. They are sandy coloured owls with bright-yellow eyes and long legs. Burrowing owls can be found in grasslands, deserts and open ranges where vegetation is low, throughout North and South America. They nest in burrows which often they have taken over from prairie dogs, ground squirrels or tortoises. Living in open grasslands as opposed to forests, the burrowing owl has developed longer legs that enable it to sprint, as well as fly.

Burrowing Owls often live in loose colonies. The adults take turns standing guard near the nest burrows. They are active both day and night, especially during the breeding season. Burrowing owls hunt by swooping down from perches and surprising prey. They also capture prey by hovering over open areas or by running along the ground to chase down their prey. The Burrowing Owls also collect mammal dung which they put in and around their burrow. The animal waste attracts dung beetles which the owl is then able to feed off. They may also collect bottle caps, metal foil, cigarette butts, paper scraps, and other bits of trash at the entrance, possibly to show that the burrow is occupied.

Burrowing owls often store extra food in their burrow to ensure an adequate food supply when they are incubating eggs and brooding chicks. They stow away extra food in times of plenty and their underground larder can reach prodigious sizes. One, a cache observed in Saskatchewan contained more than 200 rodents.