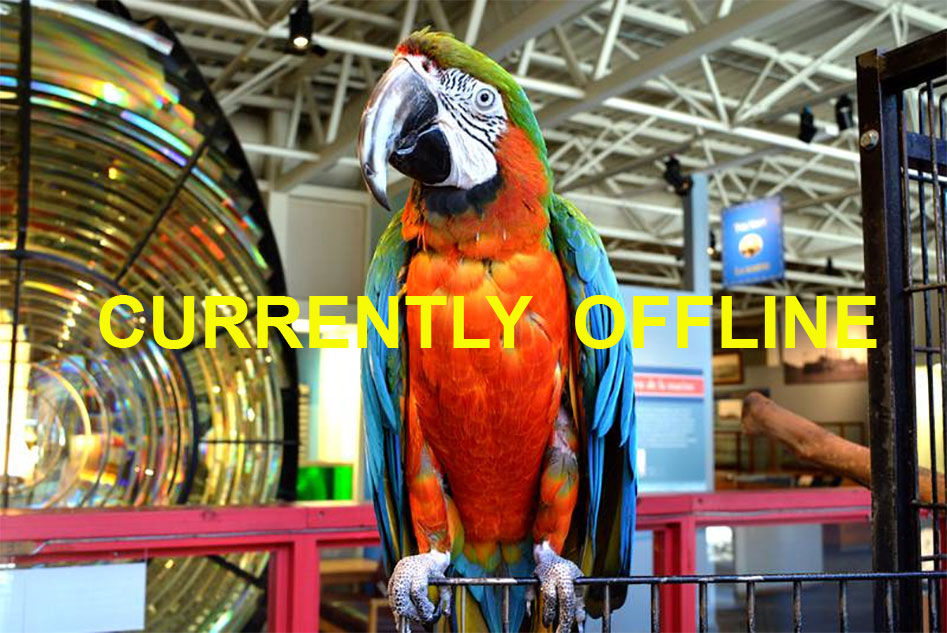 
More info: Merlin joined the Maritime Museum of the Atlantic's crew during a Pets at Sea event in 2006. Merlin is particularly fond of green grapes, peanuts, carrots, walnuts and yes, even crackers! Merlin is quite talkative and laughs and sneezes on a regular basis. "Cracker" and "Peek-a-boo" are a regular part of his vocabulary. He is usually willing to talk to people but is also quite happy to chat to himself !

Rainbow macaws are a hybrid, caused by cross-breeding the Scarlet and Golden Blue macaw.

Macaws are perhaps the most easily recognizable birds in the parrot family. Colourful and entertaining, these birds have been kept as pets for hundreds of years. Macaws are native to South America, Central America and Mexico and whilst most are found in rainforest habitats, where their bright plumage fits in with colorful flowers, fruits and plants, other species also exist in woodland or drier savannah-type regions.

Apart from their striking colouring, macaws have a large curved beak, long tail, and a lighter coloured facial patch (which varies in size between species), which is what separates macaws from other types of parrots. Each bird’s facial feather patterns are completely unique, much like fingerprints in humans. Their powerful beaks allow them to easily crack open seeds and nuts, while their highly manoeuvrable, scaly tongue contains a bone that they use as a tool to manipulate food and tap into fruit.

Macaws normally weigh between two and four pounds, which is quite hefty for a bird. The largest of the macaws, the hyacinth macaw, can reach lengths of nearly three and a half feet long from the beak to the tip of the tail. Also, they boast an impressive wingspan of up to 60 inches.