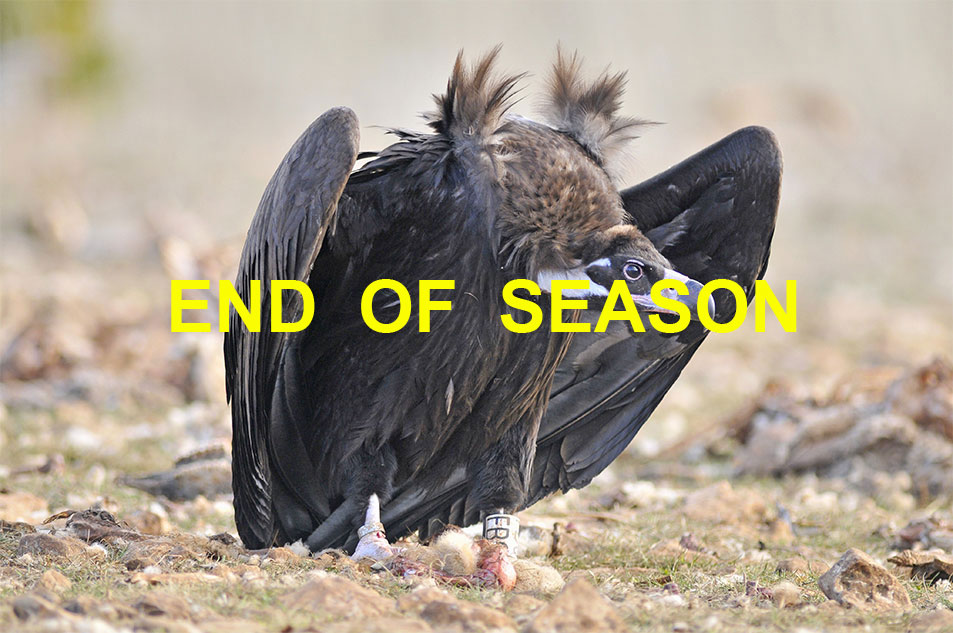 
More iInfo: The black vulture is also known as the monk vulture, Eurasian black vulture or the cinereous Vulture. It breeds across southern Europe and Asia from Spain to Korea, but is endangered throughout its European range. It is resident except in those parts of its range where hard winters cause limited movement. The black vulture prefers high mountains and large forests, nesting in trees or occasionally on cliff ledges.

Black vultures are monogamous and pairs are believed to mate for life with pairs remaining together year-round. Black Vultures perch for long periods in close proximity to potential nest sites as early as four to six weeks before egg-laying, presumably to determine if the site is safe and has not been disturbed. They generally return to previous sites where they have been successful. Black Vultures typically lay two eggs, which are incubated by both the male and female, for 32 to 45 days.

After hatching, the young are brooded continually until 14 days of age and then intermittently until they are 24 days old. Parents regurgitate liquefied food to their young as often as 20 times a day. When the chicks are 14 days old they begin to receive solid food. As the chicks mature, parents gradually spend more time away from the nest. Juvenile black vultures fledge at 10 to 14 weeks of age, but remain dependent on their parents much longer sometimes being fed up to eight months after fledging.

The current black vulture population in Spain is thought to be around 3,000 breeding pairs, which is more than 90% of the European population. Andalucia alone has 412 pairs, 16% of the Spanish population. Therefore, Spain is the only country in Europe that has healthy populations of black vultures to provide birds to support reintroduction programmes for this species in Europe. So successful has been the increase in black vultures in Spain, conservationists have felt able to donate birds to kickstart three new breeding populations across the border in France.