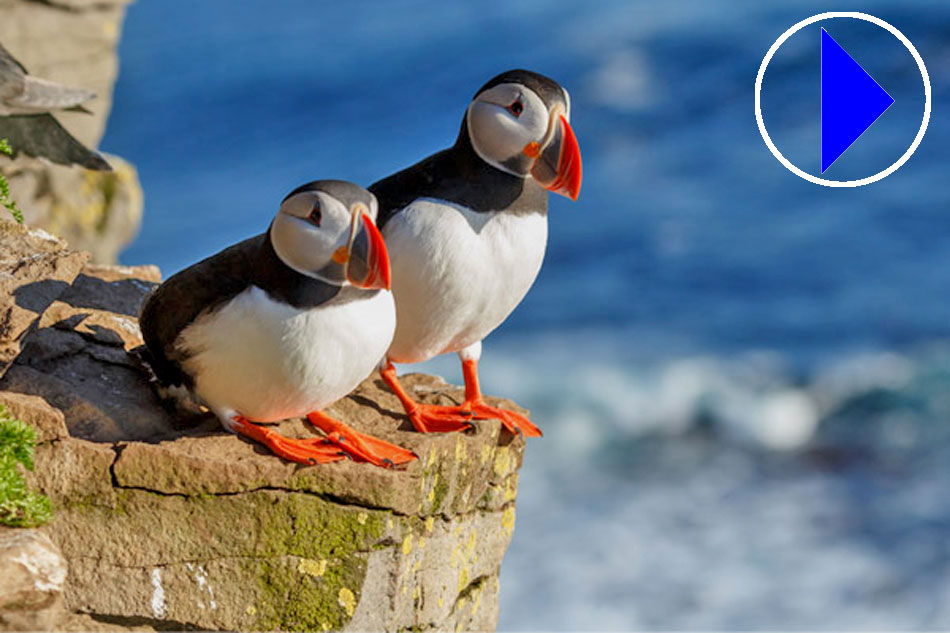 
More info: The main webcam on Burhou, is perfect for watching a general view of the main puffin colony area, and shows lots of puffin burrows. Watch out for flying mud as the puffins re-dig and shape burrows, and later, puffins bringing back material like weed and grass to line their nest.

Puffins use their bills and feet to dig their burrows preferably in earth or between rocks on steep sea cliffs where there is less danger from predators. They use their bills to cut into soil and then shovel away loose material with their feet. They dig dog-like, shovelling dirt out behind themselves. Most burrows are 2 to 3 feet long (70 to 110 cm). At the back of the burrow the parents build a soft nest of feathers and grass where they incubate the egg. The burrows often have a toilet area at the first bend. The young chick uses this area as a bathroom so as not to soil its feathers. As it matures, the toilet is moved closer to the burrow entrance, helping to keep the chick clean. If the chick became too soiled, it may damage it’s waterproofing, which would be fatal once the chick takes to sea.

From the end of May, the puffins bring back fish for the pufflings inside the burrows. Adult puffins eat mainly small fish, such as sand eels, herring, hake and capelin. Puffin diets vary from colony to colony due to the variety of fish around the breeding islands. The puffin’s raspy tongue holds fish against spines on the palate, while it opens its beak to catch more fish. During winter puffins may also eat crustaceans.

Gulls often hover by the burrows, waiting for the puffins to bring back fish which they will try and steal – this is known as kleptoparasitism.