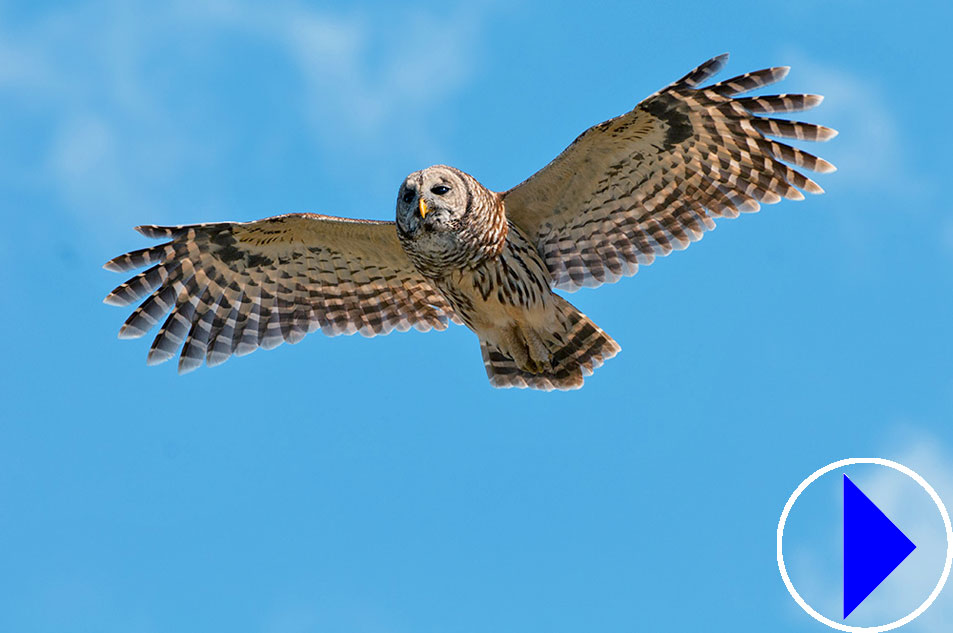 More info: The barred owl webcam is in a wooded area in the backyard of Jim Carpenter, President and CEO of Wild Birds Unlimited, who has hosted the camera-equipped owl box 1999. Set more than 30 feet high against the trunk of a pignut hickory tree, this Barred Owl box was first occupied in 2006. Since then, the box has hosted several nests, including successful attempts since 2013.

The barred owl is native to North America. Barred owls are well-known for their distinct hoots and calls and have around 8 distinct types of hooting. For this reason, they are also known as the hoot owl or eight-hooter.

The barred owl takes its name from the distinct white and brown bars on its body. It has dark brown almost black eyes, as compared to the yellow eyes of other species of owls. It has dark rings around its eyes, and a hooked, yellow beak. The head of this owl is rounded and shows an absence of ear tufts.

Barred owls are widespread across North America. Their preferred habitat is old deciduous and coniferous forests that have a proximity to swamps or marshes. They nest in empty tree cavities or in the abandoned nests of other birds. Their nests are usually lined with a layer of soft feathers. Barred owls do not migrate, and generally they do not stray beyond their territory, unless there is a shortage of food. Although the bird is mostly active at night, it will also call and even hunt in the daytime.