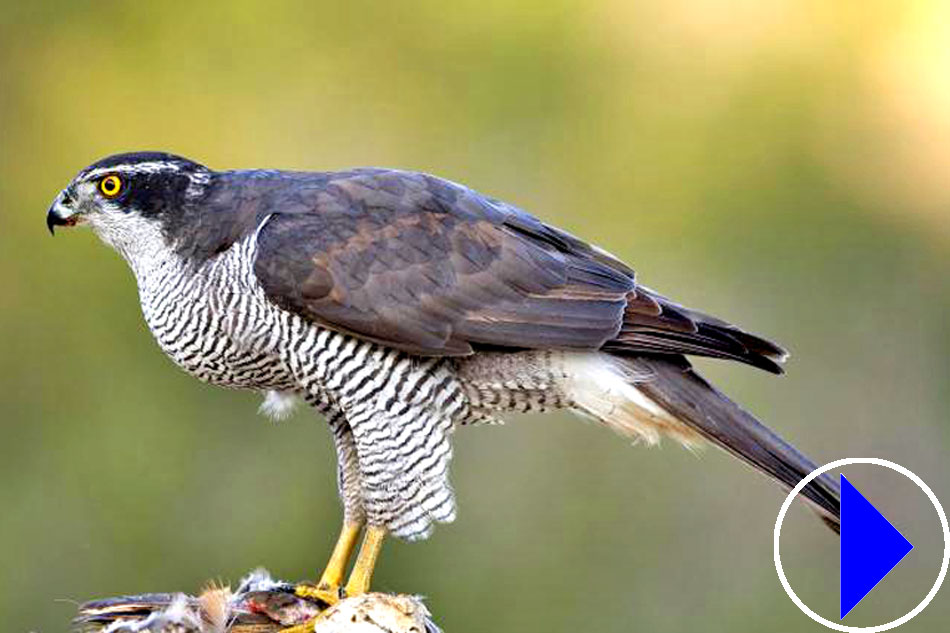 
More Info: The northern goshawk is a medium to large diurnal bird of prey that is often considered a "true hawk". They are found in Eurasia in most areas of Europe excluding Ireland and Iceland and in North America, they are most broadly found in the western United States, including Alaska, and western Canada. During the cold winter months they migrate to warmer areas, usually at lower elevations.

Northern goshawks inhabit both mixed and coniferous forests. More important than the type of trees is the composition of the actual stand of trees which should be tall with old growth, a reasonable canopy and minimal undergrowth, all of which provide favourable conditions for hunting. Most goshawk nests are constructed under the canopy or near the main fork of a tree.

Northern goshawks are usually opportunistic predators with the most important prey species being small to medium-sized mammals and medium to large-sized birds. Birds are usually the primary prey in Europe. Northern goshawks often select young prey during spring and summer, attacking both nestling and fledgling birds and infant and yearling mammals, as such prey is often easiest to catch and convenient to take to the nest.

Northern goshawks breed once per year between early April and mid-June, with peak activity occurring at the end of April through May. A mating pair of northern goshawks begins to prepare their nest as early as two months before egg laying. When courting a mate, female goshawks will attract males in the area by either performing dramatic aerial displays and vocalizing, or by perching in the nesting area and vocalizing.

The female northern goshawk typically lays two to four eggs which begin to hatch within 28 to 38 days of laying. Goshawk nestlings stay at the nest until they are 34 to 35 days old, when they begin to move to nearby branches in the same tree. They may begin to fly when they are 35 to 46 days old. Juvenile fledglings may be fed by their parents until they are about 70 days old.