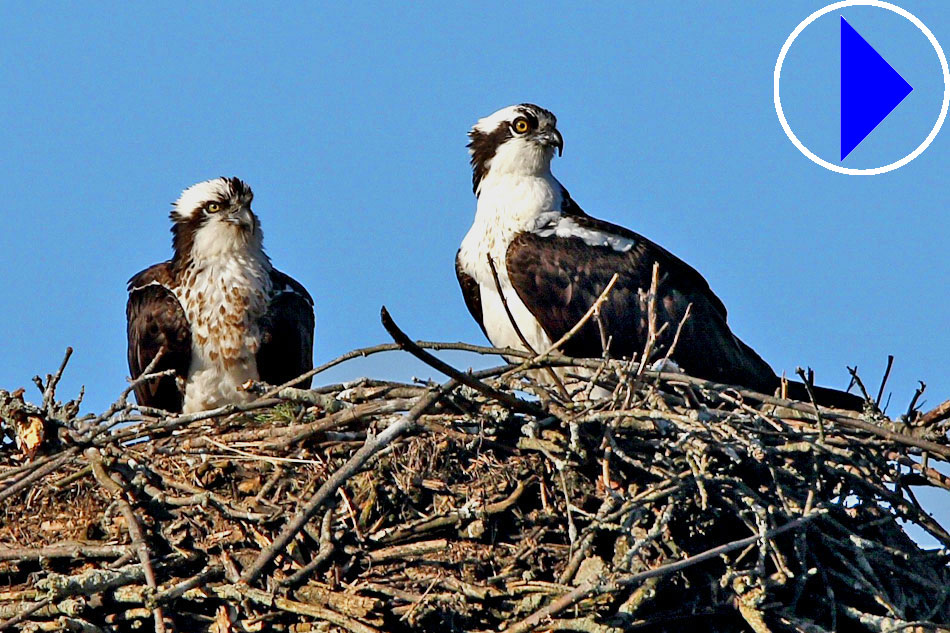 
More info: The osprey webcam at Island Beach State Park focusses on a pair of breeding ospreys. In the summer of 2014 viewers began calling the ospreys in this nest Bay and Bandit. Bay is short for Lady of the (Barnegat) Bay. That summer, after a storm, the original male went missing. Another male arrived at the nest and Bay let him onto the nest and accepted him as a mate. He is a banded osprey who "stole Bay's heart and the nest" - thus the name Bandit.

Island Beach State Park has a plentiful supply of fish in the bay which is the main diet of ospreys and therefore a big attraction.

The chicks which hatch at Island Beach State Park are part of Project Redband. Since 2014, just over 150 young ospreys have been banded with red auxiliary “field readable” bands at nests on Barnegat Bay. Unlike the silver aluminum USGS bands, the red bands are readable on birds when they are alive.

The main goals of Project RedBand are to engage the public in osprey management and conservation along the Jersey Shore. At the same time, collecting data from re-sightings, to learn about dispersal, foraging habits, site fidelity, migration routes, and the life span of ospreys.

The nest and osprey camera are named in honor of Paul D. "Pete" McLain (1926-2014). Pete was a conservationist, hunter, fisherman, writer, and former deputy director of the NJ Division of Fish, Game and Wildlife. His work to bring the osprey back from the brink of extinction is legendary.