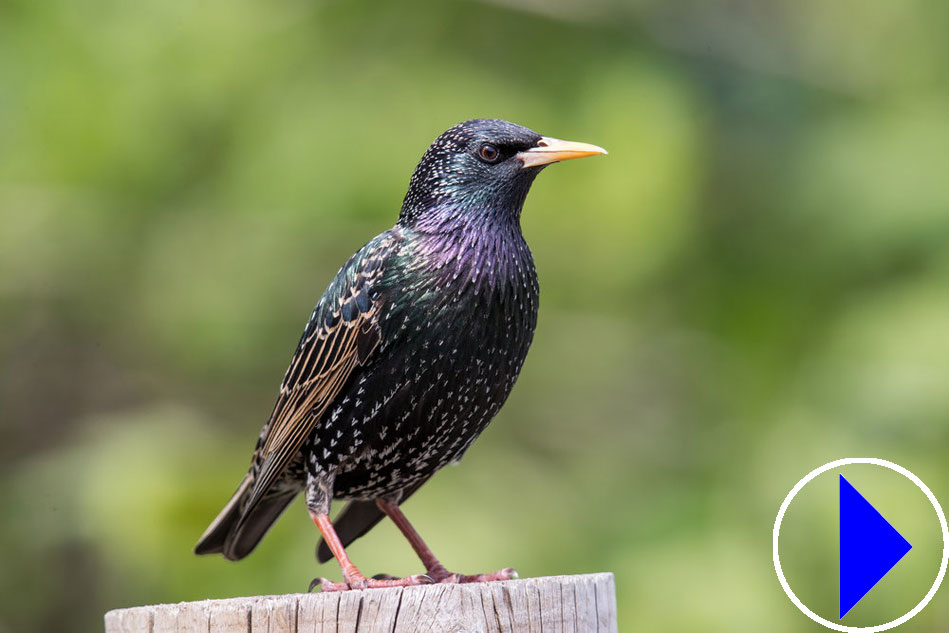 More info: The native range of the European starling is Europe, southwest Asia and northern Africa. It is an introduced species in other countries around the world where it now proliferates. Adult starlings are a striking, oily black colour, with a purple and green sheen. In the winter, they are covered in tiny beige spots. Young starlings are dark grey-brown.

European starlings are well adapted to living in a variety of environments and are common in towns, suburbs, and countryside near human settlements.

European Starlings are ground foragers with a diet consisting of a variety of invertebrates, fruits, grains, seeds, and garbage. Starlings forage on lawns and other areas of short grass, such as pastures, golf courses, parks and similar places.

Starlings are generally monogamous birds that aggressively claim nesting cavities from other species. They are prolific breeders producing on average one to two clutches per year with four to six eggs per clutch for each nesting pair. Eggs are incubated generally for around 12 days before hatching and nestlings take about 3 weeks before being ready to fledge. Starlings can live for approximately 2-3 years or more.

During the breeding season starlings are generally solitary or found in pairs, but in the fall and winter, they will form large roosting flocks that may number up to one million birds or more that twists, turns and swoops across the sky - this is called a murmuration.