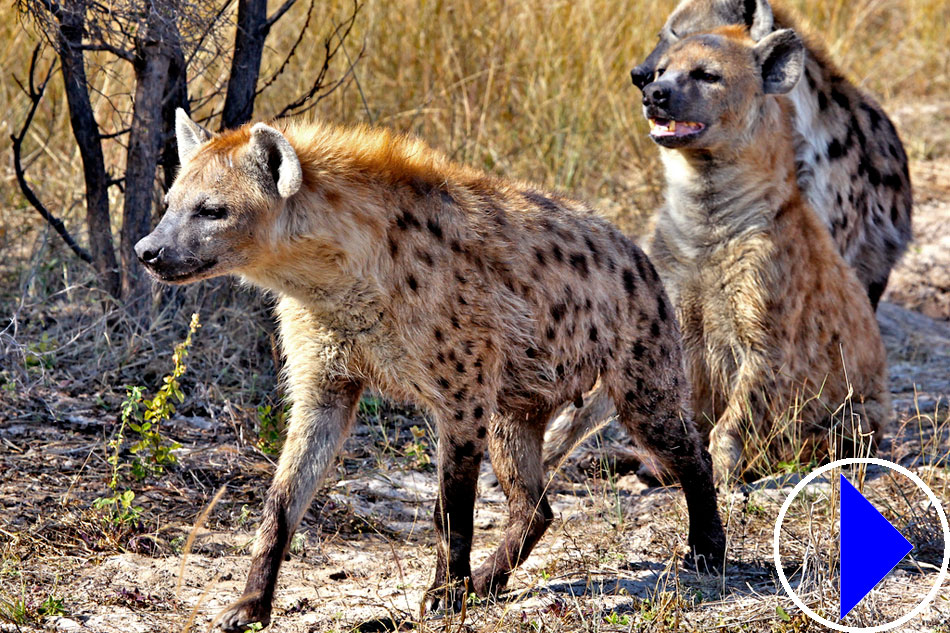 
More info: Spotted hyenas are the largest of three hyena species – the other two being the brown hyena and striped hyena. Although hyenas appear similar to dogs, they are actually more closely related to cats. They are found throughout much of Africa and eastwards through Arabia to India.

Spotted hyenas weigh between 50 and 80 kg, with the females being larger than the males. They have slightly longer front legs than back legs which gives then their characteristic sloping look. Their coat is short, between yellowish and red, with oval-shaped and irregular dark brown spots which are missing on their head, throat and thorax and it has a short, bristling mane. Spotted hyenas can reach speeds of up to 50 km/h for more than 3 km. They are also good swimmers.

Spotted hyenas are strong capable hunters and more often than not, they will hunt down their own prey rather than scavenge. They hunt in groups of 10 to 30 individuals, led by a dominant female. Their powerful jaws and teeth are designed for a meat-based diet, and have no problem dealing with the bones, teeth and horns of their prey. What the spotted hyena hunts depends on the size of the clan – a large clan can hunt bigger animals including young rhinos, adult wildebeest, zebras, and Cape buffalo. The hyenas work in a group when hunting such large prey, and young hyenas take years to become successful. Smaller packs chase down gazelles, impalas, warthogs, and waterbucks. They will also pick out the young and weak from a herd.

Hyenas are intelligent, resourceful, and efficient creatures. It has been revealed that spotted hyenas have particularly enlarged forebrains, the region involved with complex decision-making.