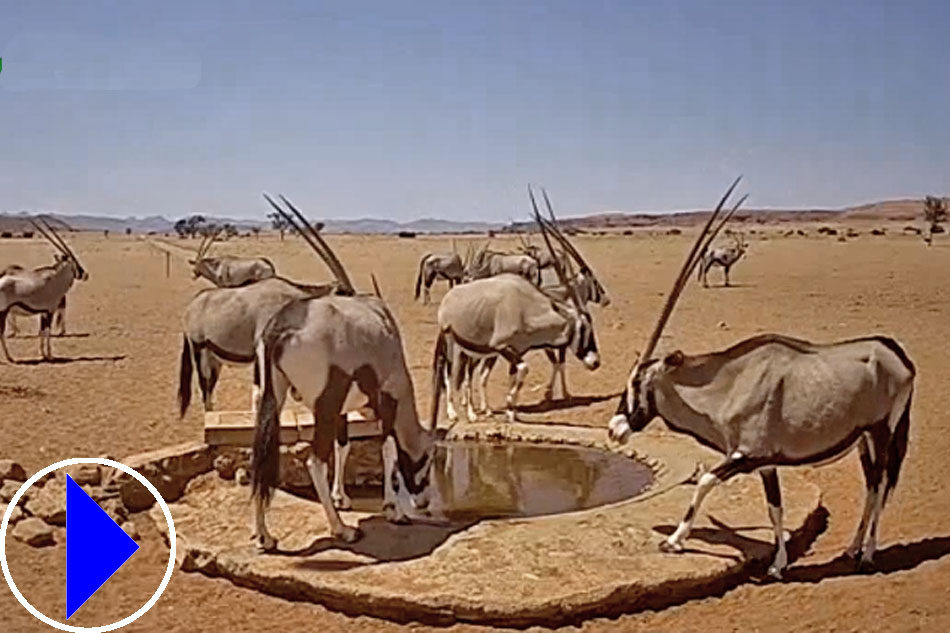 LIVE WEBCAM WITH ORYX IN NAMIBIA

More Info: The oryx is a large antelope with a striking appearance of long horns and distinct colouration. Both sexes of the species have horns, although the male’s horns are marginally shorter and thicker. The long horns come in handy for protection from predators such as lions, leopard, and hyenas. If threatened, oryx display a unique behaviour: standing sideways to appear larger. If this fails to intimidate the enemy, oryx use their horns to defend or attack.

Oryx occur in the more arid regions throughout the African continent where they feed on course grasses and thorny shrubs – often during the morning and late afternoon and early evening. They move in small, mixed groups or large herds of up to 100 or more, searching for water and browsing or grazing. They may also dig for tubers and roots. Oryx will form mega-herds of several hundred individuals when there are large areas of fresh vegetation.

Having to consume up to 3 liters of water per 100kg of body weight per day, oryx have successfully evolved to extract water from fruit and vegetables such as the Tsamma melon to maximize their water intake, as well as concentrating their urine to decrease water output.

Oryx spend the hotter parts of the day standing or reclining in shaded areas. As ruminants, this gives them a chance to chew their cud and digest their food.

When it is time to give birth, the female oryx will leave the herd to deliver one calf. Like all ungulates, the calf is able to get up and follow its mother when just a few hours old. The mother often hides her young for its first two to three weeks while she forages before returning to the herd. The calf can feed on its own after about four months, staying with the parent herd but no longer remaining with its mother. Oryx reach maturity at one to two years old.